Agenda
Agenda
Day
Month
Week
October 2021 Oct 2021
Collapse All Expand All
Oct
17
Sun
Concert – La Tour de mon jardin @ Milton Community Hall
Tickets
Oct 17 @ 7:30 pm – 8:30 pm
Le Tour de mon jardin: Songs and stories from my Francophone roots with Michel Lalonde is an evening concert at the Milton Community Hall celebrating English and French songs and stories.
The concert takes place on Sunday, October 17, 2021 at 7:30 p.m.
Originally from Ontario, Michel Lalonde has been a part of the Canadian music scene for decades. He was a founding member of the acclaimed Quebec-based folk rock Garolou who won a Felix award as Folk group of the year and a gold record for their debut recording. He has released three solo albums Délit de suite in 1987, L’Amour fou in 2011 and Comme un engin in 2019. He has also recorded four albums with Saskatchewan based La Raquette à claquettes whose string-band sound has garnered them both a WCMA and an ECMA award.
FREE for Miltonvale Park residents, aged 55+. By donation for others.
Seating is limited. Contact– 902-368-3090 or [email protected] to reserve tickets. Vax Pass required. 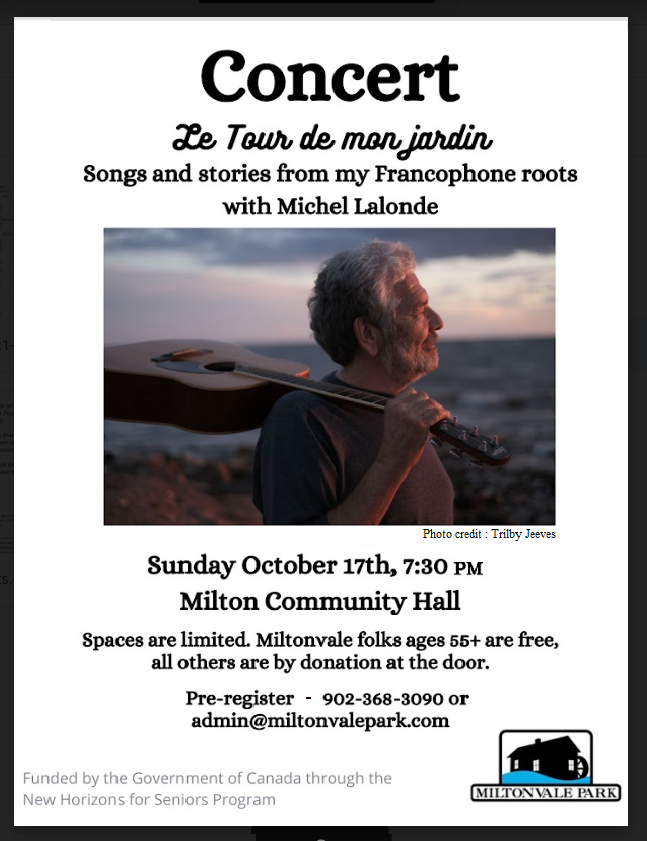 Classes are generally full but there may be the occasional vacancy. If you would like notification of vacancies -please contact the Council Office.

Plus 20 additional hours by chance or appointment throughout the week.

Plus 20 additional hours by chance or appointment throughout the week.

Development Officer Michael Olubiyi will be working for the municipality on Wednesdays from 9 a.m.- 2 p.m. from spring-fall. He may not always in the office at this time, as he may have to visit properties. If you would like to make an appointment, contact the Municipal Office at 902-368-3090 0r email Michael at [email protected]

The Municipal Council for  the Rural Municipality generally meets the third Wednesday of each month at 7:30 at the Milton Community Hall. The Council may not meet in July, August or December unless there is time-sensitive business. The public is invited to attend. Please pre-register at [email protected] or 902-368-3090.